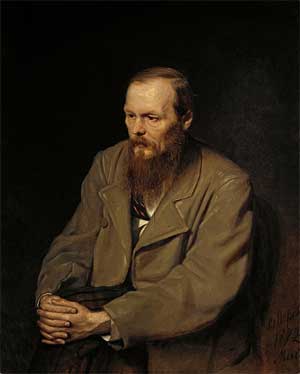 Dostoyevsky’s parents were part of a multi-ethnic and multi-denominational Ruthenian–Litvin noble family from the Pinsk region, with roots dating to the 16th century. Branches of the family included Russian Orthodox Christians, Roman Catholics and Eastern Catholics.[3] Dostoyevsky’s immediate ancestors on his mother’s side were merchants; the male line on his father’s side were priests.[4][5] His father, Mikhail, was expected to join the clergy but instead ran away from home and broke with the family permanently.[6]

In 1809, the 20-year-old Mikhail Dostoyevsky enrolled in Moscow’s Imperial Medical-Surgical Academy. From there he was assigned to a Moscow hospital, where he served as military doctor, and in 1818, he was appointed a senior physician. In 1819 he married Maria Nechayeva. The following year, he took up a post at the Mariinsky Hospital for the poor. After the birth of his first two sons, Mikhail and Fyodor, he was promoted to collegiate assessor, a position which raised his legal status to that of the nobility and enabled him to acquire a small estate in Darovoye, a town about 150 km (100 miles) from Moscow, where the family usually spent the summers.[7] Dostoyevsky’s parents subsequently had six more children: Varvara (1822–92), Andrei (1825–97), Lyubov (born and died 1829), Vera (1829–96), Nikolai (1831–83) and Aleksandra (1835–89).[8][4][5]

Fyodor Dostoyevsky, born on 11 November [O.S. 30 October] 1821, was the second child of Dr. Mikhail Dostoyevsky and Maria Dostoyevskaya (née Nechayeva). He was raised in the family home in the grounds of the Mariinsky Hospital for the Poor, which was in a lower class district on the edges of Moscow.[9] Dostoyevsky encountered the patients, who were at the lower end of the Russian social scale when playing in the hospital gardens.[10]

Dostoyevsky was introduced to literature at an early age. From the age of three, he was read heroic sagas, fairy tales and legends by his nanny, Alena Frolovna, an especially influential figure in his childhood.[11] When he was four his mother used the Bible to teach him to read and write. His parents introduced him to a wide range of literature, including Russian writers Karamzin, Pushkin and Derzhavin; Gothic fiction such as Ann Radcliffe; romantic works by Schiller and Goethe; heroic tales by Cervantes and Walter Scott; and Homer‘s epics.[12][13] Although his father’s approach to education has been described as strict and harsh,[14] Dostoyevsky himself reports that his imagination was brought alive by nightly readings by his parents.[10]

Some of his childhood experiences found their way into his writings. When a nine-year-old girl had been raped by a drunk, he was asked to fetch his father to attend to her. The incident haunted him, and the theme of the desire of a mature man for a young girl appears in The Devils, The Brothers Karamazov, and other writings.[15] An incident involving a family servant, or serf, in the estate in Darovoye, is described in “The Peasant Marey“: when the young Dostoyevsky imagines hearing a wolf in the forest, Marey, who is working nearby, comforts him.[16]

Although Dostoyevsky had a delicate physical constitution, his parents described him as hot-headed, stubborn and cheeky.[17] In 1833, Dostoyevsky’s father, who was profoundly religious, sent him to a French boarding school and then to the Chermak boarding school. He was described as a pale, introverted dreamer and an over-excitable romantic.[18] To pay the school fees, his father borrowed money and extended his private medical practice. Dostoyevsky felt out of place among his aristocratic classmates at the Moscow school, and the experience was later reflected in some of his works, notably The Adolescent.[19][13] 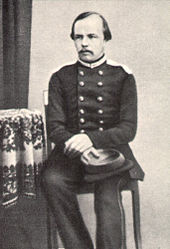 Dostoyevsky as an engineer

On 27 September 1837 Dostoyevsky’s mother died of tuberculosis. The previous May, his parents had sent Dostoyevsky and his brother Mikhail to St Petersburg to attend the free Nikolayev Military Engineering Institute, forcing the brothers to abandon their academic studies for military careers. Dostoyevsky entered the academy in January 1838, but only with the help of family members. Mikhail was refused admission on health grounds and was sent to the Academy in Reval, Estonia.[20][21]

Dostoyevsky disliked the academy, primarily because of his lack of interest in science, mathematics and military engineering and his preference for drawing and architecture. As his friend Konstantin Trutovsky once said, “There was no student in the entire institution with less of a military bearing than F. M. Dostoyevsky. He moved clumsily and jerkily; his uniform hung awkwardly on him; and his knapsack, shako and rifle all looked like some sort of fetter he had been forced to wear for a time and which lay heavily on him.”[22] Dostoyevsky’s character and interests made him an outsider among his 120 classmates: he showed bravery and a strong sense of justice, protected newcomers, aligned himself with teachers, criticised corruption among officers and helped poor farmers. Although he was solitary and inhabited his own literary world, he was respected by his classmates. His reclusiveness and interest in religion earned him the nickname “Monk Photius“.[23][24]

Signs of Dostoyevsky’s epilepsy may have first appeared on learning of the death of his father on 16 June 1839,[25] although the reports of a seizure originated from accounts written by his daughter (later expanded by Sigmund Freud.[26]) which are now considered to be unreliable. His father’s official cause of death was an apoplectic stroke, but a neighbour, Pavel Khotiaintsev, accused the father’s serfs of murder. Had the serfs been found guilty and sent to Siberia, Khotiaintsev would have been in a position to buy the vacated land. The serfs were acquitted in a trial in Tula, but Dostoyevsky’s brother Andrei perpetuated the story.[27] After his father’s death, Dostoyevsky continued his studies, passed his exams and obtained the rank of engineer cadet, entitling him to live away from the academy. He visited Mikhail in Reval, and frequently attended concerts, operas, plays and ballets. During this time, two of his friends introduced him to gambling.[28][24]

On 12 August 1843 Dostoyevsky took a job as a lieutenant engineer and lived with Adolph Totleben in an apartment owned by Dr. Rizenkampf, a friend of Mikhail. Rizenkampf characterised him as “no less good-natured and no less courteous than his brother, but when not in a good mood he often looked at everything through dark glasses, became vexed, forgot good manners, and sometimes was carried away to the point of abusiveness and loss of self-awareness”.[29] Dostoyevsky’s first completed literary work, a translation of Honoré de Balzac‘s novel Eugénie Grandet, was published in June and July 1843 in the 6th and 7th volume of the journal Repertoire and Pantheon,[30][31] followed by several other translations. None were successful, and his financial difficulties led him to write a novel.[32][24] 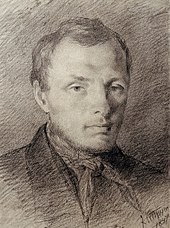 Dostoyevsky completed his first novel, Poor Folk, in May 1845. His friend Dmitry Grigorovich, with whom he was sharing an apartment at the time, took the manuscript to the poet Nikolay Nekrasov, who in turn showed it to the renowned and influential literary critic Vissarion Belinsky. Belinsky described it as Russia’s first “social novel“.[33] Poor Folk was released on 15 January 1846 in the St Petersburg Collection almanac and became a commercial success.[34][35]

Dostoyevsky felt that his military career would endanger his now flourishing literary career, so he wrote a letter asking to resign his post. Shortly thereafter, he wrote his second novel, The Double, which appeared in the journal Notes of the Fatherland on 30 January 1846, before being published in February. Around the same time, Dostoyevsky discovered socialism through the writings of French thinkers Fourier, Cabet, Proudhon and Saint-Simon. Through his relationship with Belinsky he expanded his knowledge of the philosophy of socialism. He was attracted to its logic, its sense of justice and its preoccupation with the destitute and the disadvantaged. However, his relationship with Belinsky became increasingly strained as Belinsky’s atheism and dislike of religion clashed with Dostoyevsky’s Russian Orthodox beliefs. Dostoyevsky eventually parted with him and his associates.[36][37]

After The Double received negative reviews, Dostoyevsky’s health declined and he had more frequent seizures, but he continued writing. From 1846 to 1848 he released several short stories in the magazine Annals of the Fatherland, including “Mr. Prokharchin“, “The Landlady”, “A Weak Heart”, and “White Nights“. These stories were unsuccessful, leaving Dostoyevsky once more in financial trouble, so he joined the utopian socialist Betekov circle, a tightly knit community which helped him to survive. When the circle dissolved, Dostoyevsky befriended Apollon Maykov and his brother Valerian. In 1846, on the recommendation of the poet Aleksey Pleshcheyev,[38] he joined the socio-Christian Petrashevsky Circle, founded by Mikhail Petrashevsky, who had proposed social reforms in Russia. Mikhail Bakunin once wrote to Alexander Herzen that the group was “the most innocent and harmless company” and its members were “systematic opponents of all revolutionary goals and means”.[39] Dostoyevsky used the circle’s library on Saturdays and Sundays and occasionally participated in their discussions on freedom from censorship and the abolition of serfdom.[40][41]

In 1849, the first parts of Netochka Nezvanova, a novel Dostoyevsky had been planning since 1846, were published in Annals of the Fatherland, but his banishment ended the project. Dostoyevsky never attempted to complete it.[42]