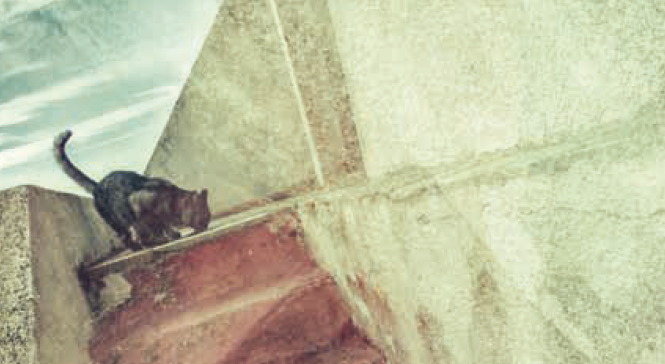 That’s your actual Greek, that is, though in Roman characters: ‘My second
homeland’. I do miss my fi rst one, England, when I’m here in Greece, but I miss my second one, Greece, a whole lot more when I’m back in England. (I have also a third one, Ireland, but that’s another story.) I came to Alonnisos for two or three weeks to help a friend put a roof on the tiny ruined house he’d bought in the Old Village. That was in 1980. I’m still here, (We expect to fi nish the roof next week), and it may not be too long before I fi nd an even more permanent home in the small and beautiful cemetery just outside the village. (The Greek tradition is to dig you up again aﬅ er three years — saves space, you know — but the bones stay in a box in the little ossuary.)

Dear me, how cheerful. The thing was that back then a local builder happened to see me actually working, and when he bumped into me at the café later he off ered me a job. At least, I think he off ered me a job; I spoke no Greek then, but that’s what the gestures seemed to mean. Now in England at that time Margaret Thatcher had just come to power, so I thought ‘Why go back?’ and I took the job, which was in fact helping to put a roof on another house belonging to an Englishman: Andrew Mann, the writer’s agent. Andrew, Tony, (the owner of the fi rst roof) and I subsequently formed the Alonnisos Blues Band, possibly the worst musical group in the Northern Sporades if not Europe, but it gave me the opportunity to play trumpet, saxophone, clarinet and guitar (though not all at the same time except in emergency) in public again, something I had not done for many years, by popular demand. (Believe it or not, we once played at the American Embassy in Athens, whose Cultural Attaché had a musical taste more enthusiastic than discriminatory.)

But how was I going to live, I mean, make the money necessary to continue living? True, it was cheaper here than in England, but not free. The answer presented itself soon aﬅ er I had bought my own ruin, (fortunately it already had a roof) and had, aﬅ er the usual Greek bureaucratic hassles, got permission to tap into the village’s sporadic (ha-ha) water supply. I asked the same local builder to come and fi t pipes, a meter, and just one tap. He did so, but all the joints leaked dreadfully and he’d even put the meter in round the wrong way. ‘Never mind,’ he said when I complained: ‘Instead of your paying water bills, the council will pay you,’ and as for the leaks he always had excuses not to come and fi x them. So I went down to the harbour and bought a blow-torch, solder etc. and did it myself. ‘Oh,you’re a plumber?’ remarked some old barba who happened to be passing. ‘Well, not really,’ I said, ‘But it’s quite easy: you’ve got water here and you want it there, so you lay some pipes and solder them together.’ ‘Ah. Will you come and fi x mine?’ I had a job. All the men in Alonnisos think they are plumbers, but at that time the only two people who could actually do the job were myself and a chap from Chile. And how would I communicate? Like many an Englishman abroad, I had early discovered that the locals persisted in pretending not to understand English, no matter how loudly one shouted. I would have to learn Greek. By then I’d fi nished patching up my own house and was taking a holiday in Athens. My favoured approach to a new language is via its poetry, but I’m afraid that, at that time, I knew of only one Modern Greek Poet: Cavafy of course. Lawrence Durrell had talked of ‘The Old Poet of the City’ in his Alexandria Quartet, and I’d been surprised to discover that Cavafy wasn’t Durrell’s invention. (Since then I’ve even visited Cavafy’s fl at in Alexandria.) I’d read Cavafy in the not-very-good English translation by Mavrogordato, so I went to a bookshop, got a complete Cavafy in the original, and tried to puzzle out Η Πόλις, which I still think his fi nest poem. Next day of course I was back at the bookshop for a Greek – English dictionary. Thus started my second but far less lucrative Greek job: literary translator from Modern Greek to English. But most of my Greek has been learnt here in the island, and my young local friend Anastasia now oﬅ en tells me off for talking not like Cavafy but in ‘Alonnisiotika’, the island’s dialect. I learnt too all sorts of Greek ways: ways that just ‘wouldn’t do’ in England. In Greece you can shout and wave your arms about if things aren’t going quite as you had hoped, and whereas in England this would result in ostracism, (a Greek word,) here it works like magic: a sudden rush to help, smiles, off ers of another ouzo. In Greece, all things are possible, but none of them happen by the ‘offi cial’ route. As a friend sometimes remarks, ‘What I like about Greece is its imperfection’. In England, things only happen by the offi cial route, and if there isn’t an offi cial route, then they don’t happen. Try, for instance, being seriously ill here in the island: Yorgos, the local doctor who has sacrifi ced his own health for the health of everybody else in the island, will write a note and send you to a hospital in the mainland. There, fi erce bureaucratic ladies will do their upmost to make sure you don’t get past reception. So you shout and wave your arms about, and a passing senior consultant takes you by the arm and within a couple of hours you have had X-rays, scans, and everything up to and including (if you’re lucky or unlucky, according to taste) a colonoscopy. In England you wait six months for each of these, by which time you are dead.

But I’m getting cheerful again. I have said nothing about the sheer beauty
of the island, which still survives the attempts of those whose only values
are monetary to cover everything in reinforced concrete. Other contributors to this book have written eloquently about the island’s beauty; I want to say a little about the demographic peculiarity of the Old Village, which has the reputation of being ‘All foreigners’. In fact it breaks down very roughly into half the houses unoccupied but still belonging to local people, many of whom no longer live in the island. A quarter belong to foreigners, most of whom come only in the summer. And the remaining quarter belong to and are inhabited by, at least in summer, local people; a few diehard locals never leﬅ the Old Village and still live here all the year round.
How did this unusual distribution come about? Well, back in the bad old days of the Papadopoulos dictatorship, there was an earthquake. It wasn’t all that destructive, but the authorities, whose tidy little minds found higgledy-piggledy hilltop villages naturally subversive, took this as an opportunity to ‘encourage’ people to move out of what had been the island’s main settlement down to hastily-put-up barracks-like concrete houses down in the harbour town of Patitiri. These had the advantages
of electricity and a more reliable water supply; most people were eager to move, and the closure of the village school persuaded many more. They still owned their old houses, which they were told they could sell to foreigners if they wished. Much hilarity; who on earth would want to live up there? But sure enough, the foreigners came, and bought. The village, for years largely empty and abandoned, started to live again. Those locals who had not sold came up and fi xed their houses as summer places; those who had sold began to regret what they had lost. That, anyway, is the
version I have pieced together over the years; there are others. I hope readers have noticed that I didn’t say, like so many foreigners settling in Greece, ‘I fell in love with the place.’ Perhaps I did fall in love with it: falling in love is all too easy; we do it all the time, usually with disastrous results that cure us, until the next time. Love, as opposed to ‘Falling in love’, lasts a lifetime, and has to come to terms with a person’s
or a place’s less attractive aspects. I may have fallen in love with Greece,
and more specifi cally with Alonnisos; I really can’t remember. But I know
that I love Greece, and that I love Alonnisos.