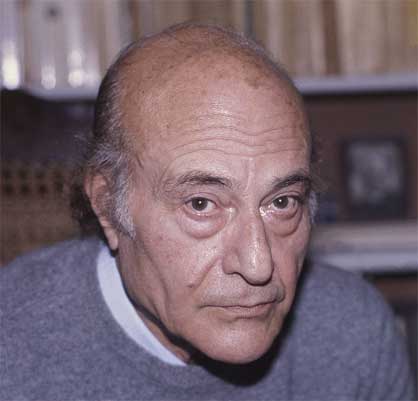 Descendant of the Alepoudelis, an old industrial family from Lesbos, Elytis was born in Heraklion on the island of Crete, on 2 November 1911. His family later moved to Athens, where the poet graduated from high school and later attended courses as an auditor at the Law School at University of Athens.[3]

In 1935 Elytis published his first poem in the journal New Letters (Νέα Γράμματα) at the prompting of such friends as George Seferis. His entry with a distinctively earthy and original form assisted to inaugurate a new era in Greek poetry and its subsequent reform after the Second World War.[3]

From 1969 to 1972, under the Greek military junta of 1967–1974, Elytis exiled himself to Paris.[3] He was romantically linked to the lyricist and musicologist Mariannina Kriezi, who subsequently produced and hosted the legendary children’s radio broadcast “Here Lilliput Land”. Elytis was intensely private and vehemently solitary in pursuing his ideals of poetic truth and experience.

In 1937 he served his military requirements. As an army cadet, he joined the National Military School in Corfu. He assisted Queen Frederika off the train and on to Greek soil personally when she arrived from Germany to marry hereditary Prince Paul. During the war he was appointed Second Lieutenant, placed initially at the 1st Army Corps Headquarters, then transferred to the 24th Regiment, on the first-line of the battlefields. Elytis was sporadically publishing poetry and essays after his initial foray into the literary world.[3]

In 1948–1952 and 1969–1972 he lived in Paris. There, he audited philology and literature seminars at the Sorbonne and was well received by the pioneers of the world’s avant-garde (Reverdy, Breton, Tzara, Ungaretti, Matisse, Picasso, Francoise Gilot, Chagall, Giacometti) as Tériade‘s most respected friend. Teriade was simultaneously in Paris publishing works with all the renowned artists and philosophers (Kostas Axelos, Jean-Paul Sartre, Francoise Gilot, René Daumal) of the time. Elytis and Teriade had formed a strong friendship that solidified in 1939 with the publication of Elytis first book of poetry entitled “Orientations”. Both Elytis and Teriade hailed from Lesbos and had a mutual love of the Greek painter Theophilos. Starting from Paris he travelled and subsequently visited Switzerland, England, Italy and Spain. In 1948 he was the representative of Greece at the International Meetings of Geneva, in 1949 at the Founding Congress of the International Art Critics Union in Paris and in 1962 at the Incontro Romano della Cultura in Rome.[3]

In 1961, upon an invitation of the State Department, he traveled through the U.S.A.; and —upon similar invitations— through the Soviet Union in 1963 and Bulgaria in 1965.[3]

Odysseas Elytis had been completing plans to travel overseas when he died in Athens on 18 March 1996, at the age of 84. He was survived by his niece Myrsene and his older brother Evangelos, who received a writ of condolence from the mayor of Athens on behalf of the nation at the funeral at the First National Cemetery.

The Poetry of Elytis

Elytis’ poetry has marked, through an active presence of over forty years, a broad spectrum of subject matter and stylistic touch with an emphasis on the expression of that which is rarefied and passionate. He borrowed certain elements from Ancient Greece and Byzantium but devoted himself exclusively to today’s Hellenism, of which he attempted—in a certain way based on psychical and sentimental aspects—to reconstruct a modernist mythology for the institutions. His main endeavour was to rid people’s conscience from unjustifiable remorses and to complement natural elements through ethical powers, to achieve the highest possible transparency in expression and finally, to succeed in approaching the mystery of light, the metaphysics of the sun of which he was a “worshiper” –idolater by his own definition. A parallel manner concerning technique resulted in introducing the inner architecture, which is evident in a great many poems of his; mainly in the phenomenal landmark work It Is Truly Meet (Το Άξιον Εστί). This work due to its setting to music by Mikis Theodorakis as an oratorio, is a revered anthem whose verse is sung by all Greeks for all injustice, resistance and for its sheer beauty and musicality of form. Elytis’ theoretical and philosophical ideas have been expressed in a series of essays under the title The Open Papers (Ανοιχτά Χαρτιά). Besides creating poetry he applied himself to translating poetry and theatre as well as a series of collage pictures. Translations of his poetry have been published as autonomous books, in anthologies or in periodicals in eleven languages.